Following a hiatus in response to pandemic measures, SALT is resuming its screenings in the Walk-in Cinema with the program Inside Joke. Organized in collaboration and as part of Electronic Arts Intermix’s 50-year anniversary, the program is curated by interdisciplinary artist Katie Vida, and can be viewed between March 29 – April 3 2022.

Founded in 1971 in the United States of America by the initiative of gallerist and collector Howard Wise, Electronic Arts Intermix (EAI) with its collection aims to cherish video and media art as a creative expression. Over the years, EAI has partnered with numerous national and international institutions and programmers, supporting artists through the distribution, preservation, exhibition and representation of their media artworks.

The screening program Inside Joke can be viewed on loop at SALT Beyoğlu Walk-in Cinema between March 29 – April 3. The program will be streamed at saltoline.org in English with Turkish subtitles, and will only be accessible to online audiences in Turkey. 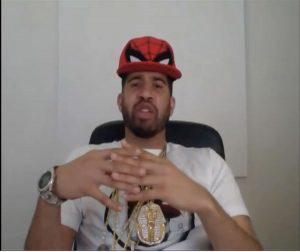 Art Thoughtz: Relational Aesthetics, is from Jayson Scott Musson’s performance series Art Thoughtz which he published on YouTube between 2010-2012. Throughout the series, Musson takes on the identity of his alter ego Henessy Youngman and satirizes art’s class and power relations. Musson utilizes the aesthetics of an educational video and tackles the term Relational Aesthetics coined by Nicolas Bourriaud, which aimed to describe the 1990s tendency in art. 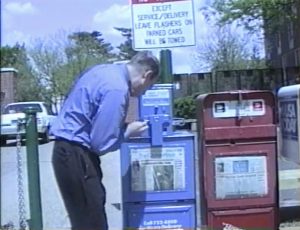 In Newsbreak, Stuart Sherman, detaches everyday objects from their assigned purposes as a means of absurdifying them and focuses on a newsrack that dispenses snacks. The video tackles the relationship between media and meta culture, and glorifies Sherman’s absurd approach and iconoclastic style, reminiscent of René Magritte and Samuel Beckett, at times disrupting historical categories. 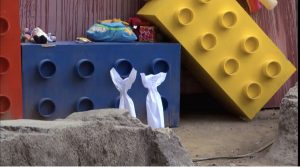 Stanya Kahn meshes documentary with the experimental, and in this video she presents an ongoing conversation between two pieces of discarded paper amidst bizarre objects and debris. The existential chatter on the human experience, between the armless and legless cronies, becomes an absurd puppet show. 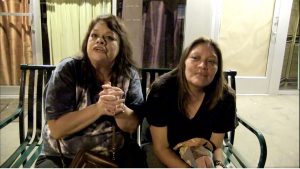 Andrew Lampert, known for his investigative work into the relationships between art, artist and audience uses the language of cinema to explore the coincidental and unexpected. The artist conducts a series of interviews at night in Portland and strolls into the city’s periphery; taşking to people on the street inquiring about what is gained and lost from new technologies. 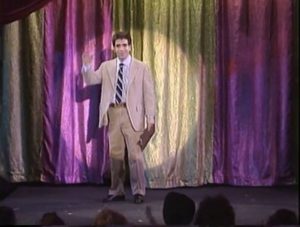 Mike’s World Orientation Video by Michael Smith in collaboration with Joshua White is designed to suggest the kind of orientation video that one might find at an American presidential library. The artist faces the world through his alter ego Mike’s images and taglines. This universe where the absurd is normalized, offers a panoramic view of the postmodern human condition. 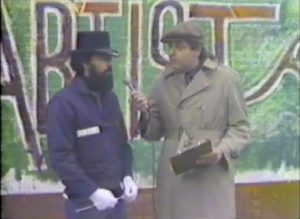 Portrait of the Best Artist by artist Jaime Davidovich, features a segment from The Live! Show a weekly entertainment program he made for cable television between 1979-1984. In this show, the artist’s alter ego Dr. Videovich conducts a street interview with the “Best Artist” Rene. Based on the historic quandary between practices of highbrow art and mass culture, the video pays an homage to the Fluxus movement.

For close to a century, the techniques of collage and literary cut-up have been used to discover new forms in the visual arts, poetry, and music by undoing and restructuring text, image, and sound. “Cut-Up: Contemporary Collage and Cut-Up Histories through a Feminist Lens,” curated by artist Katie Vida, explores a multigenerational lineage of women artists who have pushed the boundary of cut-up techniques across media, including sculpture, video, sound art, painting, performance, printed matter, poetry, and photography.

Featuring works from 1967 to the present, “Cut-Up” explores how collage and cut-up have informed the visual arts, literature, and experimental sound art. The exhibition also pays special attention to how the process of cutting apart and reordering language parallels an activist impulse to disrupt the status quo and develop new, alternative narratives. This skepticism and eschewing of “traditional” media is a strategy that was embraced by feminist artists in the late 1960s. At that time these artists embraced newer forms such as performance, film, text based works, and ephemeral sculpture, in part, to bypass patriarchal histories associated with established media such as monumental sculpture and painting.

Through a layering of imagery, text, materials and sound, the artists in “Cut-Up” create tension by disrupting narrative and reorienting the viewers’ expectations “The cut itself is the technology through which these artists address and manipulate language and image,” curator Katie Vida elaborates, “Through an additive and/or reductive process of developing fresh visual and linguistic spaces the artists in this exhibition show a commitment to breaking apart what is seemingly codified to engage in alternative visions.”